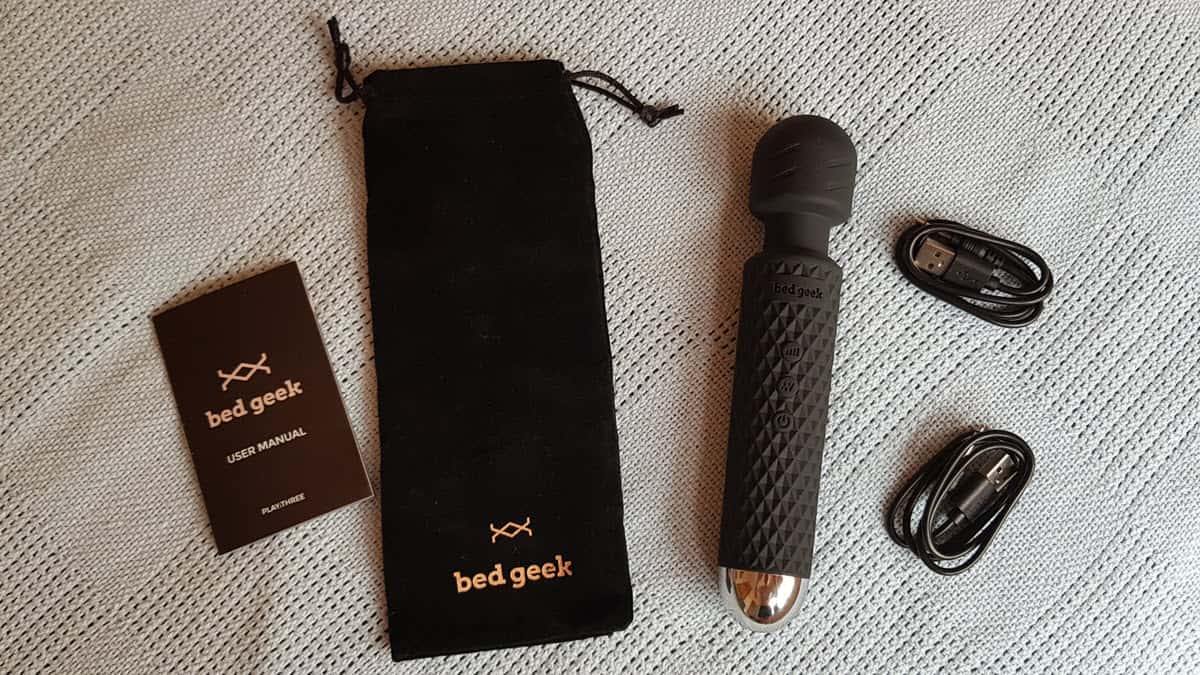 Who is the Bed Geek Wand for?

In a nutshell, we’d recommend the Bed Geek Personal Wand Massager if you are looking for a discreet sex toy with great clit stimulation. The fact that it’s cordless makes it much more convenient than the old-fashioned original Hitachi Magic Wand. It also happens to be way less expensive. In fact, it’s downright affordable!

Magic wands like this one from Bed Geek are very intense. We wouldn’t recommend this if you are after subtle sensations, although it can be used with your underwear still on for a less intense experience. We love the fact that it’s waterproof and we like the design, which is fairly minimalist.

What Alice says about The Bed Geek…

The Bed Geek Cordless Full Body Massager was a present from Jack when I was out of action, due to surgery. My vagina was a no-go zone for 6 weeks, so I decided to take the “When life gives you lemons…” approach and focused on trying new sex toys and gadgets. The Bed Geek Wireless Body Wand became my “lemonade”. Not that sex toys shouldn’t also be used when penetrative sex is available, but between full-time jobs, three kids and running a (barely) functional household, making time for novelty is often put at the bottom of the priority list!

But back to The Bed Geek and The Clit:

Wow! Wow! Wow! I think this is one of the most powerful sex toys of this size, the kind that gets you from zero to WOW very quickly. Perhaps too quickly, but lucky clit owners can just go for more and more. I have heard that the original, plug-in-the-wall Hitachi Magic Wand is more powerful than any rechargeable magic wand. That is almost a scary thought.

The size was perfect for my (small-ish) hands and also for Jack’s (big-ish) hands. It was comfortable, easy to hold and cordless (except during recharging times).

Perhaps we’re clumsy, but we sometimes found ourselves fumbling to get to the setting we wanted. With 20 modes and 8 speeds, it is easy to get a bit lost and struggle to get back to your favorite setting. Call us vanilla, but we’re not big fans of fancy vibration modes and prefer the ‘constant on’ settings. While experimenting, we ended up turning the wand off and then on again (number one tech trick!) as the fastest way to get back to our favorite setting.

This is one of the most affordable ‘Hitachi’ Magic Wands around, and given its great performance, it is one of the best value for money!

The silicone felt like a high-quality grade and I have had bad experiences with vibrators that did not agree with my sensitive skin. The Bed Geek had no negative side effects on my skin. The material is waterproof making it easy to clean. Like all sex toy companies, Bed Geek recommends water-based lubricants, but our usual lube of choice is coconut oil (extra virgin, of course). Silicone, as opposed to latex and other materials, seemed fine with that. A great feature of this wand is that it’s waterproof! This made cleaning it super simple – I just took it into the shower and washed it with soap and water. Good as new! Oh, and speaking of showers… Did I mention this magic wand is waterproof? Enough said… 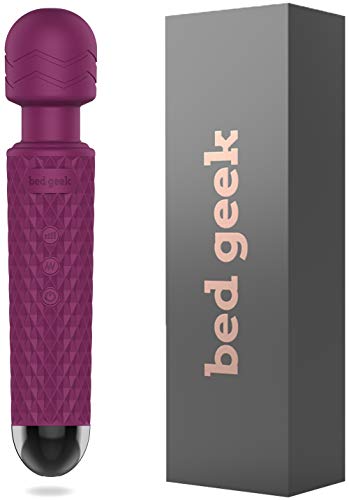 This is a powerful toy, no doubts! There are 20 patterns to choose from and 8 intensities. Probably too many! During use, I’ve accidentally pressed the pattern button and it is frustrating to know that I am many clicks away from going back to my favorite mode! Likewise, the 8 intensities – I think too many, and very close in terms of feeling. In my opinion, three would suffice. Simple things in life are often the best.

Jack's Sound Testing Lab
I tested the loudest and quietest modes of the Bed Geek personal wand massager and found it to be one of the noisiest toys we’ve tested:

Even on its lowest setting, we wouldn’t feel comfortable using it in a house with anyone else home.

For the curious, you can listen to what the Bed Geek modes and intensities sound like:

Classic wand shape, but it is black, with some metallic silver color near the base, which makes it a very discreet toy. I would even say stylish or classy. Our 11 year old saw it in our drawer and asked if it was a microphone! “Yes, a broken one” I replied.

The Battery was quickly fully charged via a USB charger and I have always had enough charge.

One of the highlights of this product is how it powerfully vibrates where it needs to – its head, whilst keeping the handle vibration-free or pretty close to it. It’s worth noting since many vibrators can leave your hand feeling a bit numb, so the vibrations don’t seem so focused. It also works great as a shoulder or neck massager (hence the name ‘personal wand massager’).

What Jack Says About The Bed Geek

Using this body wand with Alice was a beautiful bonding experience. Seeing your partner orgasm has to be one of the most beautiful experiences possible. And in this regard, the Bed Geek wand did not disappoint!

We also experimented with this magic wand on me, which was… interesting. I have to say that pressing the wand against any part of the penis was not pleasant. It’s too localized and simply too ‘buzzy’, for lack of a better word! It was much more pleasant when the head of the wand was gently pressed against the perineum. I’d say it’s a nice occasional addition and something a bit different, but more fun for clit owners (as intended by design).

Overall, this Bed Geek body wand is great value for money. It is discreetly shaped and unlikely to draw unwanted attention if discovered by curious youngsters. Most importantly, despite the compact size, it delivers wonderfully ‘rumbly’ vibrations in just the right places!

How do you charge the Bed Geek Wand?

The Bed Geek Personal BodyWand comes with a USB charging cable. The cable can be plugged into a USB charger, ie. the ones you use to charge your cellphone. The end that plugs into the Bed Geek wand is a ‘male’ prong that slides through a small sealed hole in the silicone at the base of the wand. Note that the Bed Geek wand and most sex toys don’t use ‘standard’ micro-USB connections, so you will need to keep hold of the charging cable that comes with it!

How do you use the Bed Geek Wand?

Umm,… lol! OK, it’s not really a silly question. In terms of turning it on, the bottom of the three buttons is the on-off switch. Press down on it until the wand buzzes. Then you can adjust the intensity with the top button (closest to the head), and change the vibration mode or pattern with the middle button. Now, how you use it is really up to personal preference! If you’re new to body wands, start slow, perhaps even through underwear, since even on the lowest setting, it can be pretty intense. Moving onto skin contact, definitely use some lubricant. Water-based lubes are recommended, although we use coconut oil and don’t seem to have any problems with silicone toys like this one. Once the Bed Geek wand is on and you’re ‘on’, begin on the lowest setting by gently pressing it against your vulva. Move it around and find out where it feels best for you. Many women will find it too intense to have direct contact with their clitoris, but the vibrations are deep and penetrating, so you don’t need direct contact to get have a great experience. Partners using this wand may need guidance to find the right zones, but once there, ‘hands-free’ body wand use is quite magical!

What lubricants can I use with the Bed Geek wand?

The manufacturer recommends water-based lubricants. We have used coconut oil with this body wand without any problems. It is important, however, not to use silicone-based lubricants with this wand or any other sex toy that is made of silicone.

How long does the Bed Geek Body Wand last between charges?

The Bed Geek wand lasts about 2 hours after being fully charged.

Can the Bed Geek wand be used while charging?

No. The Bed Geek Personal Wand Massager cannot be used while charging.

What is the Bed Geek Wand made of?

The exterior of the Bed Geek body wand is made silicone.

How long is the warranty for the Bed Geek Personal Wand Massager?

The Bed Geek wand has a 1-year warranty.