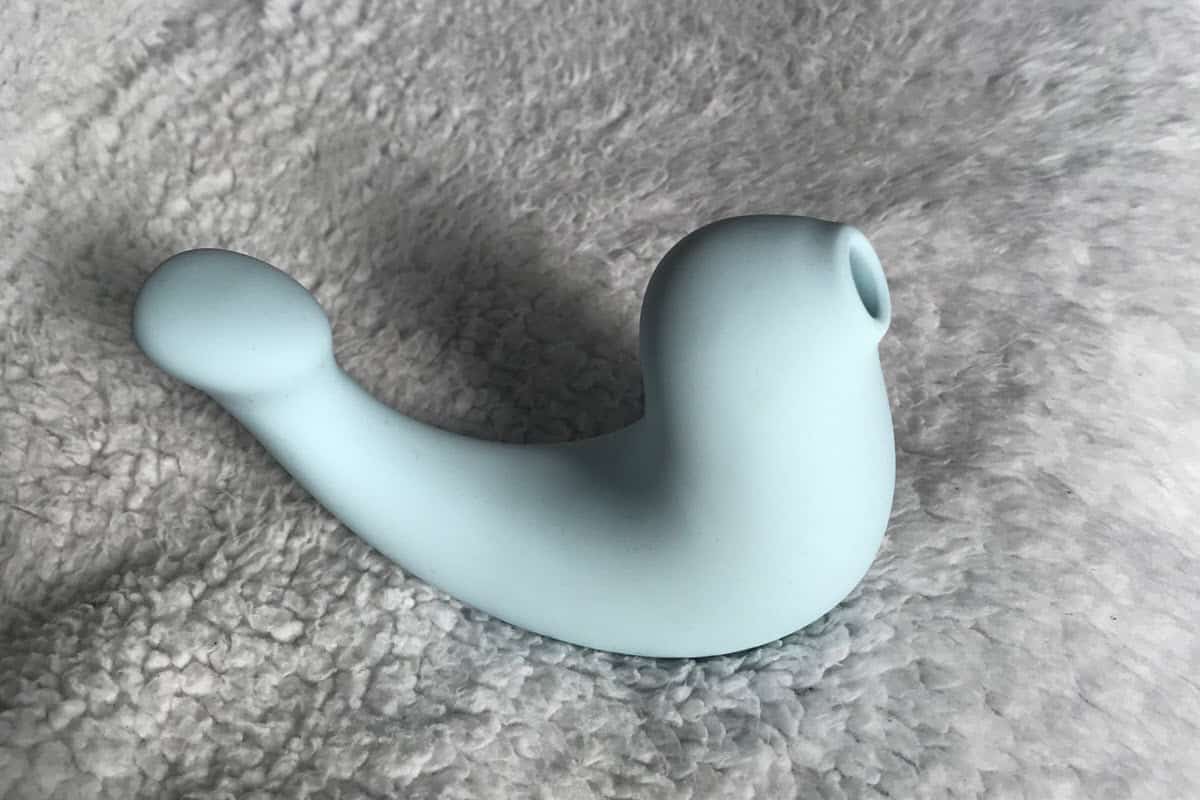 Who is Osuga G Spa for?

Osuga’s G Spa is for clit and G spot owners who are after a versatile multi-function sex toy capable of producing internal and external (clitoral) stimulation and great orgasms. Osuga G Spa will also be suitable for those who are still unfamiliar with the world of sex toys and want to explore different sensations.

I am also happy to report that Osuga G Spa is NOT a ‘Jack of all trades and master of none’ kind of sex toy as in one of those that promise it all and achieve nothing! Quite the opposite! I found Osuga G Spa quite efficient in terms of delivering both G-spot and clit orgasms.

Our rating: 3.5 scoops of Vanilla

This 2-in-1 pleasure toy has, on one side, a little mouth that realises ‘sonic pulse suction’. In other words, it has a ‘suction’ feature that sucks the clitoris in and out. I was able to reach climax very quickly with this sex toy.

My only disappointment with G Spa is that both functions – clit sucker and G-spot vibe – can not be used at the same time. When the vibrating end is inside your vagina, the ‘sucking mouth’ faces up and can not be placed on the clit!

In my case, that is not a big deal as I prefer to enjoy each sensation separately rather than simultaneously. However, no doubt there are sex toy users who like to experience both at the same time. In this case, I recommend checking Lovehoney’s Indulge G-Spot and Clitoral Suction Stimulator and our complete Lelo Enigma review.

The Osuga G Spa is a device that’s suitable for both external and internal use. It has both a sucking and vibrating motion, so you can get a couple of different types of pleasure.

The tip of the bird is ideal for internal use, since it’s small and vibrates. On the other hand, you can use the head of the device for external stimulation.

While you will be able to firmly press the ‘chubby’ part of G-Spa against your clitoris while the tail is inside, the sucking mouth of this toy faces the other way and cannot provide stimulation.

Osuga’s G Spa’s shape reminds me of seals- chubby in the body, with a big mouth and a ‘thin’ tail.

The shape of the Osuga G Spa is also sort of like a U. It has a wide head on one end of the U and a smaller tip on the other end of the U. That allows for dual pleasure, vaginal penetration on one side and clit stimulation on the other.

You can get G Spa in three different colors: a light pink, a pastel yellow, and a soft baby blue.

The main feature of Osuga’s G Spa is no doubt its dual functionality; however, with G Spa, the sucking and the internal stimulation won’t happen together.

Products that are similar to this include Lovehoney’s Indulge G-Spot and Clitoral Suction Stimulator and Lelo’s Enigma – both sex toys have dual functionality and, in both cases, clit sucking and internal stimulation can happen simultaneously.

Another point of difference between Osuga G Spa and Lovehoney Indulge is the price – Indulge is a cheaper sex toy – and design – G Spa is more attractive. Indulge’s shape is also more like a ‘v’ than a ‘u’. If Osuga’s G Spa is out of your budget, Indulge can be a great option.

Like most Lelo products, Enigma is a top price item. Compared, to Osuga’s G Spa, Enigma is unsurprisingly more expensive. Enigma’s design with a ‘sucking mouth’ facing the ‘right way’ will no doubt be more suitable for those who like simultaneous clit and G-spot stimulation.

The G Spa is one of the most ergonomic shapes on the market. It is relatively small, – about the size of my hand (and slightly smaller than my husband’s).

As expected, most dual-engine/dual-functionality sex toys are more expensive than single-vibe ones. So, Osuga’s G Spa does not come as a bargain.

If you are after a cheaper option, Lovehoney’s Indulge may be the right toy for you.

The G Spa is made out of very soft silicone.

You can also use it in the shower, thanks to its water-resistant material.

Nevertheless, if you are after a sex toy for a bath, Osuga’s G Spa won’t be it as it is not recommended for a fully underwater environment. Shower and a quick water rinse are OK, as long as there’s no prolonged soaking.

The Osuga G Spa allows you to use both vibration and suction. In terms of intensity, there are three different sucking levels to pick from.

Osuga’s G Spa is a cordless USB rechargeable device. The charge has magnetic ends which make sure the toy stays in place during charging times.

The device holds up well, and you’ll get quite a bit of enjoyment out of it before it’s time to charge it.

It takes two hours to charge. Once it’s fully charged, you can use it at its maximum sucking speed for four hours without a problem!

If you’d rather get vibration action, you’ll get two and a half hours of use at maximum speed. Or, if both motors are running, it will go for an hour and a half.

In standby mode, the device can last for more than five hours.

I found the vibrating side of Osuga’s G Spa pretty quiet. The same cannot be said for the sucking end of it! Although as it gets pressed firmly against the skin, the noise levels go down. If you, like me, have kids around, you might want to wait until they are out of the house to enjoy this toy.

This dual-functional sex toy is a great option for those looking for a versatile, multi-function pleasure device. While both functions are great, it is a little disappointing that the sucking and the internal vibe cannot happen together. Said that, there’s no doubt, Osuga G Spa is capable of delivering amazing orgasmic moments.

Our rating: 3.5 scoops of Vanilla