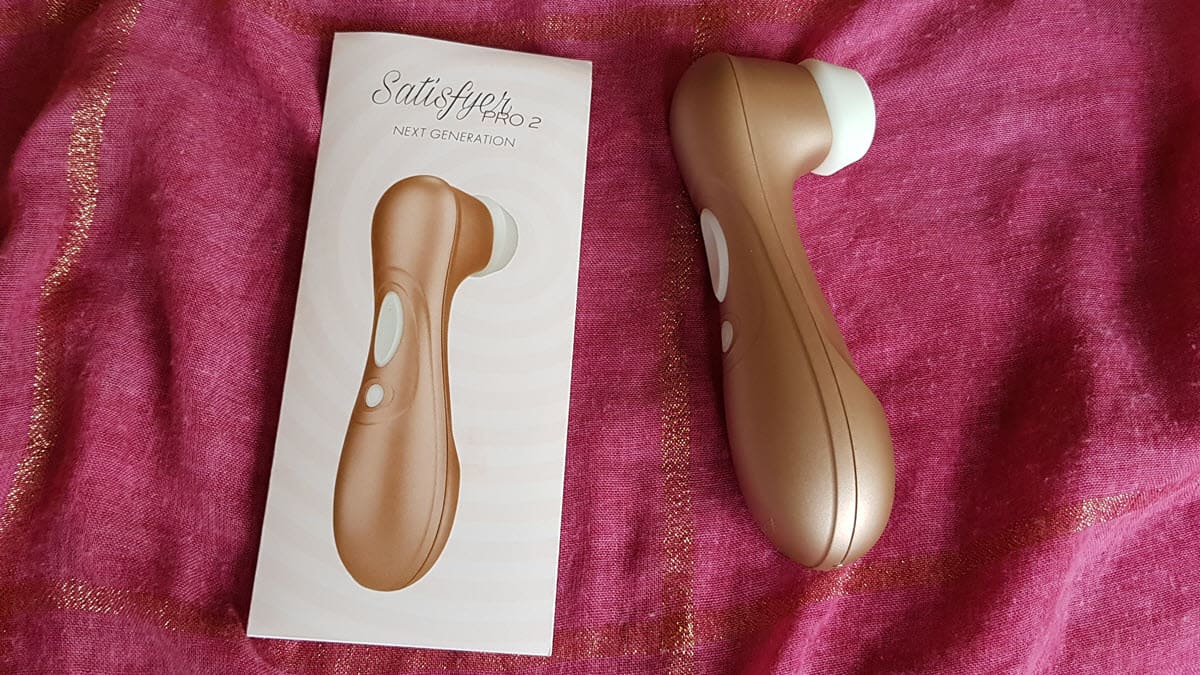 Who is the Satisfyer Pro 2 for?

In a nutshell, we’d recommend the Satisfyer Pro 2 Next Generation if you are looking for a sex toy dedicated to clit stimulation and oral sex feeling at a super reasonable price. The idea behind the product is to reproduce oral sex through its suction air movement. The amazing thing is that it does so without any direct contact with your actual clit, as the cap of the Satisfyer Pro 2 goes around your clit rather than sitting on it.

Needless to say, it is super gentle on your clit skin. But don’t think that gentle means it is powerless! Quite the opposite! I am part of a Facebook group where many have reported having an orgasm within seconds of using the Satisfyer Pro 2!

Related Articles: How to Use the Satisfyer Pro 2 and Lelo Sona Review

This product is also highly recommended if you like to combine bath and orgasm, since water works really well with the suction action. And it is great if you are not so much into the ‘vibrating’ sensation of traditional sex toys. Couples can also use this during penetrative sex.

What Alice says about the Satisfyer Pro 2…

The Satisfyer Pro 2 has been a top selling clit stimulator according to many retailers.

I also came across some glorious secret testimonials in a private Facebook group for moms I am part of… there were so many positive comments about the Satisfyer Pro 2 that one person proudly called the group ‘The Satisfyer Cult’.

So, I had no other choice but to find out for myself what was all that buzz about!

Here is what I found out:

About the Satisfyer Pro 2 Next Generation

After some extensive research, I had high expectations for this ‘little sucker’ and the Satisfyer Pro 2 lived up to it. It certainly falls into the ‘very quick to orgasm’ category. It was fun to use it by myself and with Jack. There was no need to go up to ‘intensity’ 11 (the highest) as I was effortlessly orgasming by the time I got to number 3. The suction touch-free (as there is no contact with your actual clit) movement is super effective and powerful.

I have read reviews about using this product hands-free because of its suction. That did not work for me, as I had to hold it all the time, however, the suction makes it stay in place effortlessly.

This is one of the most affordable clit stimulators around and, considering its high performance, it’s great value for money. No wonder a lot of retailers list the Satisfyer Pro 2 as one of their top-selling products!

The cap is made out of ‘body-friendly’ (as stated by the manufacturer) silicone which feels nice on the skin. The handle, which is only designed for hands and not for penetration, is made out of hard plastic. This toy is also waterproof and highly recommended for those who like to combine a relaxing bath with an orgasm or two (or three…). The waterproof feature also makes it easy to clean.

There are 11 intensities to choose from and a ‘minus’ & ‘plus’ scrolling button. I always start by trying out the lowest intensity and gradually increase towards the highest. The first two modes felt like a pleasant ‘tickle’, but, when I reached intensity three, magic happened. The highest intensity was probably too much for me. In fact, I would not go past number 5, but everyone is different and some people may require that sort of intensity to orgasm. The minus & plus button is definitely a highlight for me, as I find it incredibly frustrating with some toys when I have to go full-circle to go back to my desired mode.

As opposed to some vibrators that can be noisy all the time, the ‘buzz’ is generally a lot quieter and contained within the suctioned cap area that goes against the clit. However, the buzz expectedly increases as the intensity goes up. However, in terms of sound, this toy really excels once it is pressed against your body – it’s extremely quiet. In fact, if you place it against your body before turning it on, and turn it off before taking it away, this is one of the few toys I would feel comfortable using when others are in the house. In real-life testing in a room with a ceiling fan, the sound of the Satisfyer Pro 2 is indetectable compared to the fan. Be warned, however, on the top setting, it is very noisy when not in contact with the body!

Jack's Sound Testing Lab
I tested the loudest and quietest modes of the Satisfyer Pro 2 and found it to have a very big difference between lowest and highest settings:

On its lowest setting, this is one of the few toys we would be comfortable using it in a house with others at home. On the lowest setting, the noise is almost imperceptible and certainly wouldn’t travel through walls or closed doors. On the highest setting, however, this is a very loud toy when it’s not pressed up against the body.

For the curious, you can listen to what the Satisfyer Pro 2 Next Generation modes and intensities sound like:

The shape reminds me of those ear examination tools used by doctors, minus the pointy end. The cap sits around your clit and the actual clit does not get touched by this toy. It simply and delightfully gets sucked by the air movement.

I love Satisfyer’s USB charging system, which can be found in all their products, including the Satisfyer Pro 2. The end that connects to the product attaches magnetically, making it very easy to recharge.

It is worth noting that the silicone cap of this toy is removable, so it can be washed separately (although we never removed ours) or even replaced. Our only (very minor) criticism about the quality of the Pro 2 is that there is no storage/carry bag provided, however, it fits quite well inside my makeup bag.

The Satisfyer Pro 2 Next Generation Manual can be downloaded here, if you ever lose the hardcopy that comes with the toy, although we found this toy easy to use without having to consult the instructions.

What Jack Says About the Satisfyer Pro 2

All jokes aside about men who need a map to find the clitoris, this toy does need a little more precision from partners than some others! If it’s not lined up correctly, then the cap won’t be encircling your partner’s whole clitoris and the sucking motion could be unpleasant or downright painful. Certainly not a major challenge, but something to keep in mind, since many other sex toys, like magic wands, don’t need any precise maneuvering to feel good for your partner.

I liked the feel of the Satisfyer Pro 2. It feels like a quality toy. The buttons are quite ‘clicky’, which has the advantage that they can’t be easily bumped, and the audible ‘click’ leaves no doubt that a setting has changed. I particularly liked that the Pro 2 starts in a very low setting that is extremely quiet. I think both Alice and I feel it’s rather jarring to turn on a loud toy in a quiet room.

Final Words on the Satisfyer Pro 2 Next Generation

Overall, the Satisfyer Pro 2 Next Generation is a good quality clit-sucking toy for a great price. It’s unlikely to draw unwanted attention if discovered by curious youngsters, although they may not believe it’d for ear examinations!

The Pro 2 is particularly well suited to women who love the clit-sucking sensation of oral sex or find that direct stimulation of the clit is desensitizing.

What does the Satisfyer Pro 2 Next Generation do?

Is the Satisfyer Pro 2 waterproof?

Yes. The Pro 2 has an IPX7 rating and can be submerged to a depth of 1 meter for up to 30 minutes. The Satisfyer is great for sexy baths.

Can the silicone cap on the Satisfyer Pro 2 be replaced?

Yes, the Pro 2 has a replaceable silicone cap.

Does the Satisfyer Pro 2 suck, vibrate, or both?

Will a clitoral hood piercing get in the way of the Satisfyer Pro 2?

Yes, it is likely that a piercing of the clitoral hood will make contact with the Pro 2 and may prevent a proper seal and therefore the sucking motion from being effective.

What is the Satisfyer Pro 2 Next Generation made of?

The handle of the Pro 2 is made from hard plastic. The cap that surrounds the clitoris and makes contact with skin is soft silicone.

How long is the warranty for the Satisfyer Pro 2?

The Satisfyer Pro 2 Next Generation has a 15-year warranty from the manufacturer.